The Tour de France is over, and there is nothing left to do apart from watch videos of Froome running up Mont Ventoux. Which even on repeat viewings always make me laugh.

It seems within the Tour de France, there are several races in one. And because it is a three week long sporting race, we tend to place a great value on how entertaining the race is. For various reasons, the GC battle in the Tour de France never seems to get the same level of drama and unpredictability of the Giro and especially the Vuelta.

If you look at all the past editions of the Tour de France it is quite rare to have a see-saw battle between the top contenders. Often, we get a period of time, where one rider seems to be better than the rest, and it becomes more a procession than a battle. – Anquetil, Hinault, Merckx, Coppi, Indurain, Armstrong and now the Froome era. Often during their period of dominance, the popularity of these grand tour winners is quite low, because the public can resent the lack of drama and competition. Usually it is retirement or the final defeat and proof of a fallibility, which brings a change in popularity. (though there is a notable exception to this rule, you shouldn’t have too much trouble working out.) I can’t think of many sports where the gallant loser is often more popular than the greatest winner of the age. In football, for example, we don’t admire the failings and human fallibility of the English football team, with the same aplomb of an eternal second like Raymond Poulidor. 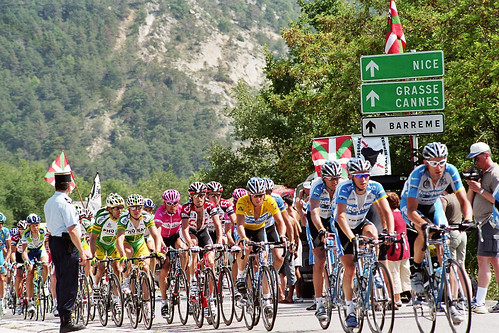 “It was a magnificently imaginative invention, a form of odyssey in which the lonely heroism of unpaced riders was pitted against relentless competition and elemantal nature. The Tour encompassed the territory of France, and Desgrange later claimed that it encouraged a sense of national identity, establishing La Patrie in clear geographic terms.”

The Tour de France is one of the biggest sporting spectacles in the world. In terms of spectators getting to see the event live, it has no parallel – with millions lining the roads of France and Europe throughout the month of July.

Stats of the Tour de France

In 2013 – a caravan of 4,500 people including  organisers – teams – media – partners – publicity caravan – providers made up the tour. This excludes many volunteers and local council workers who help to get the tour ready.

Spectators by the side of the road

“I can see the Tour in their hearts, and in their eyes. For that, I say thank you to everyone in Yorkshire who has made this Grand Depart so very, very special.”

How Long is the Tour?

The slowest average speed was in 1919, when French roads were in a bad state after the First World War. The winner Firmin Lambot (Bel) completed the course at an average speed of 24.056 km/h

It was a great Tour de France. Nearly every stage was interesting, with full on racing the whole way through. I seem to remember years when half the Tour de France was predictable, flat sprint stages, which only came to life in the last 10km. The sprinters union may complain the tour has been ridiculously hilly, with relatively meagre pickings for the likes of Cavendish and Griepel, but for the viewer – classic style one-day races (cobbles, side winds and short sharp climbs) do make for intriguing and interesting racing.

It’s hard to imagine that in the 90s and early 00s, the Tour would put on massive long flat time trials. Amidst the near hysteria of Froome taking 60 secs from his nearest challenger in the Pyranees (60 secs he later lost in the Alps), who can forget the days of Indurain putting in six minutes to his nearest challenger in long time trials? Those years of Indurain and Armstrong domination were pretty much like watching paint dry. This year’s tour was not quite as finely balanced as we might have liked, but another mountain top finish in the Alps and the tour would have been on a knife edge.

I always knew doping was wrong.

I could list another 97 reasons, but what I never appreciated – was how doping creates a toxic legacy for many years after the event.

The legacy of generations of dopers, is that it has made people prone to cynicism, suspicion and disbelief. It is a very toxic legacy for  cycling; yet it is not the dopers who face the music – they retire, keep their prize money, write a best selling confessional story into the bargain – or get a job in the media…

The problem is that against a backdrop of recent doping histories, exceptional performances in cycling are frequently compared against former dopers. It’s good to ride up a mountain fast, but if you ride up faster than a former doper, people are ready to jump to conclusions. Whether justified or not, it is painful to see, and diminishes the potential of sport to act as a source of inspiration and enjoyment.

The first nine days of the Tour de France were gripping and exciting stuff. As long as you weren’t one of the riders carted off to hospital with a broken bone, the Tour was fantastic entertainment. The Tour organisers were probably feeling pretty pleased with themselves for creating nine stages of great interest and unpredictability. The Tour looked to be poised on a knife edge, with the Fab Four (expanding to the Fab Five or Six as we really got carried away) eyeing each other up over the tiniest of second margins.

But, in the time taken to climb the last 14km of today, the Fab Four had rapidly disintegrated into the Boom Boom Froome show. To say Sky were going to ride defensively, it was a masterclass in blowing your opposition into the waters. There was little crumb of comfort for any of his opposition. Quintana did his best and limited his losses to fight another day, but he still had to suffer the ignominy of getting nabbed on the line, by a Sky super-domestique (Porte).

It’s always a funny week – the week before the Tour de France. There’s no cycle races on TV, just a week of speculation, talk and bog-standard questions and answers with the riders.

I’m not a betting man, but if I was. I think the Tour Prologue would be a good bet.

Tom Dumoulin (7/2) – Dumoulin has tremendous power and one of the best time trial positions I’ve seen.  This is the best odds I’ve seen.


Alex Dowsett (33/1) – An outside bet for the prologue. Unfortunately, I don’t think he will make it, though I would still rate his chances at better than 33/1. The prologue is actually a short time trial – close to the 10 mile TT – where Alex holds Comp record at 17.20 – a time even Bradley Wiggins couldn’t beat on a windy day on the V718.

Geraint Thomas (50/1) Again, deep down, I can’t see Thomas at the top of podium come the end of the race. You can guarantee Thomas will be there or there-abouts. The strength of Thomas is that he is an excellent all-rounder – but just not quite the out and out short distance time trial specialist.

Bookies for prologue at Cycling Weekly

Read moreBetting on the prologue and yellow

Everyone seems to agree that the Tour de France in Yorkshire  / England was an unprecedented success. But, will it be a one hit wonder or will the legacy of the tour help boost the long term profile of cycling in the UK?

As the tour swept through Britain, you could see potential seeds of a real cycling legacy which could offer many benefits to the nation. And these could be real benefits like improved health, reduced pollution, greater community spirit – benefits which definitely surpass just an understanding of what an echelon is, or what the yellow jumper means.

Some potential benefits of Tour de France legacy include:

Usually we’re in a rush to get somewhere and the car is king. Because we’re in a rush we end up sitting in nice long traffic jams getting frustrated. The Tour de France was an opportunity to reclaim the streets, bringing whole communities together. People were having a great time. I’ve never seen so many happy people, not bad to say the action lasted only 30 seconds. In an age of digital communities and instant messaging, it is a relief to remind ourselves that nothing can beat going out into the world and meeting real people. I even broke a habit of lifetime and started talking to strangers by the roadside. The millions by the roadside show that it wasn’t just the attraction of seeing some lycra fleeting by – we actually love an excuse to be part of something big.

The Tour was a good example of how there is life after the motorcar and busy streets. It was definitely helped by good weather and having the Tour de France come through, but it shows there’s a lot to be said for creating towns where people can walk, cycle and chat and not just wait for articulated lorries to fly past and the pelican lights to change. Sundays would make a great time to have more road closures. Life doesn’t end if you can’t drive 24 hours a day, 7 days a week.

Some selected photos from the Tour de France in Yorkshire.

Thanks to photographers who offered creative commons photos.

On the road to Harrogate. Photo Adam Bowie, flickr

After being blown away by stage 1, we had the good fortune to have a second bite at the cherry. Yet again the world’s biggest cycle race was passing over God’s own County and straight over many of my old training roads. It felt too good to be true, a weekend of cycling heaven.

The French Gendarmes looked pretty serious. But, the British police were really enjoying themselves. It will remain an abiding memory watching a police car go up the climb with the theme tune to “Last of the Summer’s Wine’ blearing out of the windows with four policeman giving high fives!

Family and friends came from all over the country – they had a field day. If you want to be seen on TV bring a flag, like this Irish flat. I was on TV twice! though you can’t see much of me. I was too busy taking photos. That’s another dilemma of watching the tour do you concentrate on cheering and enjoying or do you try and capture something?

I’ve noticed that I’ve been getting a lot of traffic in recent days for the Google search ‘Buttertubs pass’, Grinton Moor, Cragg Vale’ – You could almost guess the route of the Tour de France by the popularity of keyword searches.

But, it would be churlish to bring up old conflicts from the dark ages, the Tour de France is giving the old county the kind of uplifting excitement and inspiration – not seen in Britain since the 2012 Olympics. Like the Olympics, the Tour de France is another vehicle for creating a spirit of international friendship and goodwill. It is an unexpected benefit of attracting a big cycle race to your shores.

Goodness me, all the pubs in Otley have translated their names into French. This is the greatest outpouring of British-French unity since British pubs started serving garlic bread! in the mid 1980s.

In a country struggling to deal with the growing influence of the European Union, you may think Britain was primarily beset with trying to regain it’s Anglo Saxon independence. But, even in the heartlands of our EU bashing county, there’s been an outbreak of French lingo, and appreciation of most things Gaelic. The Tour de France has done more for British-European relations, than a whole string of EU directives and speeches.