By tejvan on February 5, 2014 in bikes, timetrials

Last Sunday, I was out on my winter training hack. I averaged 16.8 mph for 70 miles and that was by sitting on Baines’ wheel for most of the ride  Yesterday I went out on time trial bike (with non-aero helmet and wheels) and averaged 21mph for 50 miles over similar terrain. In an incredibly unscientific method of deduction, that’s about 4mph faster on time trial bike.  It’s probably not quite that much. My legs felt better yesterday, and there was a little less climbing. But, as a rule of thumb, if you go from a road bike to good time trial set up, you should be able to go 1-3 mph for the same power effort.

It depends on many variables. My summer road bike stripped down is a good 1-2 mph faster than a winter training bike with mudguards, creaking gears and heavy road tyres. Maybe there is a psychological benefit that when you get on a time trial bike, which makes you want to pedal faster.

How much faster is a TT bike?

One of the great debates in cycling is how much faster would an old school time-triallist like Alf Engers have gone on a full time trial bike with dischwheel e.t.c? It’s impossible to say. Some of the 1970s time triallists had their position down to a fine art. It was only really the arm positions which could have been improved on with tribars. Though discwheels and skinsuits would add quite a bit too.  In 1978 Alf Engers did a 49.24 for a 25 mile time trial ( 30.3mph / 48.8g km/h). That was before TT bikes, aerobars, discwheels and aero-helmets – to say nothing of wind tunnels and modern nutrition methods. 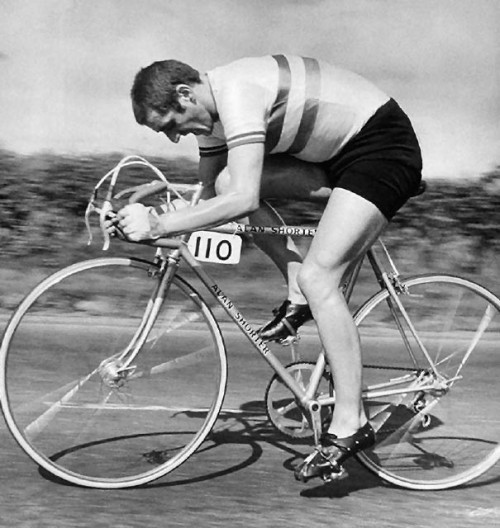 Alf Engers in TT mode. The main benefit of a modern TT set up would have been moving his arms out of the wind-flow. Then the UCI changed the rules so basically you had to use 1970s equipment. In 2000, Boardman just beat Merckx to set a new athlete’s hour record of 49.441 km

That suggests a 7km/h difference between the fastest time-trial position and an ordinary road bike.

In practise, the superman position has been banned from most competitions. The average time trial position is somewhere between the Superman and road bike. 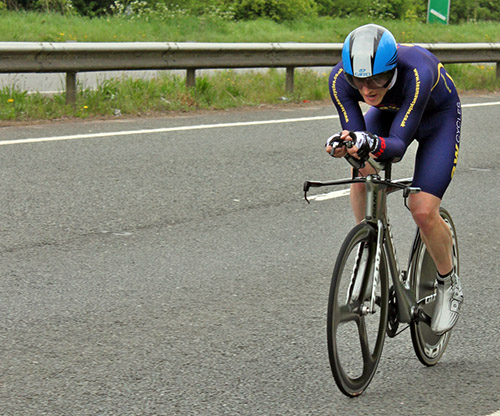 Is a road bike ever quicker for a hilly time trial?

When I get on a time trial bike, I get a real buzz from the speed. That’s one of the attractions of cycling – self-propelled speed. It is uncomfortable, but the more you ride it, the more used to the position you get. But, unless you are doing time trials, most people are reluctant to spend money on a bike they won’t use very regularly. I like both the road bike and the time trial bike. For a ride around the hills of Yorkshire and the Lake District I would choose a road bike. But, I also like the time trial bike sessions in a different way.

19 Responses to Difference between road bike and time trial bike