Some-days the force is with you, other days you’re stuck in your 56 big ring, wishing you had a compact chainset. The weather was great on Wednesday afternoon, but the legs weren’t as co-operative as I would have liked. On Sunday during the Maidenhead TT, I felt in good form, but Wednesday it felt harder work to do any good efforts. In a way I was kind of put out of my misery by a mechanical mishap. My chain came off, breaking my front mech and power meter, all at the same time. It meant the gears didn’t work on the inner 39 ring, so I was stuck in my TT 56 ring. 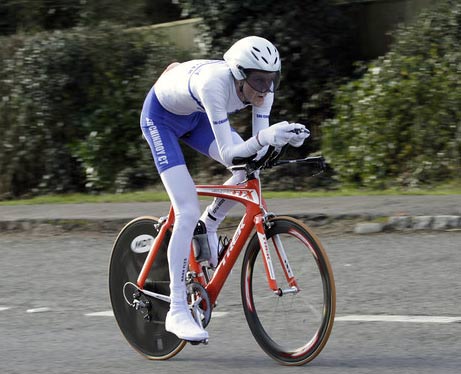 For those who like to show off the size of their chain ring sizes, 56 teeth might sound impressive – though it is still paltry compared to some of the really big TT mashers, like Nik Bowdler running off a proverbial 74 teeth dinner plate.

However, a 56 is still no joke when you’re in West Wycombe and need to get back to Oxford over the Chiltern ridge. For some reason best known to myself I took a wrong turning and found myself fighting a gradient upto Turville of 10% +. I love climbing, but not when you’re mashing a ridiculously over-geared TT bike. At least my Quark power meter had broken again, so I couldn’t see how slowly I was going. Power meters – love ’em or hate ’em. But, when they keep breaking, you are tempted to throw them in the dustbin and ride on a strictly technological free bicycle.

The TT machine is a thing of beauty and speed. But, when you’re stuck in a 56 mashing 30rpm, the allure quickly dissipates. You suddenly notice how heavy it is, how unwieldly for steep climbs, and also how intrinsically uncomfortable it is. It was hard on the back, legs and I didn’t like the creaking sound it was making. I couldn’t really work out whether the creaking was from the bike or my body. Fortunately, at the top of Christmas Common, it’s downhill and then mainly flat all the way to Oxford. When I got onto the B road through Chiselhampton I was able to get back into something resembling a decent rhythm.  Another 50 miles on the clock, but quite eventful.

At the start of the week, I was looking forward to the Tour of Ingleborough. 27 hilly miles around Ingleton, Settle and Horton in Ribblesdale. The start sheet was pretty impressive. 90 riders, including the in form Rapha duo of Richard Handley and Hugh Carthy. Also two Madison Genesis riders, including Ian Bibby. Unfortunately, on Thurs, my back suddenly went into spasm walking around Tescos looking for some vegetarian sausages. (not quite as impressive sounding as getting knocked of by wild dog at 45mph on a Portuguese mountain) I had to drop everything and rather awkwardly get home without moving any neck muscle. It’s getting better quite quickly, but it is touch and go whether it will be up-to one hour in the TT position tomorrow. It also relies on getting front mech fixed, I’m definitely not going to be doing the Tour of Ingleborough stuck in the 56.

3 Responses to Stuck in the big ring