Today was a 30 mile hilly time trial around Christmas Common, Frieth and Henley. They are roads that I know quite well because I do a lot of training around here. Since the weather was surprisingly good, I decided to ride out to the event. A good 20 miles as the crow flies. Although the weather was near perfect, the recent rains are still in evidence. Water was flooding off the mono-cultured farmland and some lanes are still reduced to puddles and potholes. I nearly came a cropper on one lane near Turville. I was lucky to get nothing more than a jarring action on my brakes.

I’ve done the 30 mile hilly a couple of times, my best time is 1:10. But that was done in temperatures of just above freezing. Today, they were nudging into the mid teens. Unfortunately, road works meant we couldn’t use original course. But, last minute changes by Maidenhead found a course, just as good.

In fact, it was a brilliant start because the first 5 miles was a long gentle drag to the top of Stokenchurch. With a nice tailwind it exaggerated your speed. At Stokenchurch you turn left along the top of the Chiltern Ridge towards Christmas Common and Nettlebed. It was quite fast, though bumpy and you had to keep your eyes open for potholes. From Nettlebed, there is a long descent towards Henley. Here the traffic was starting to build up, and on quite a few occasions I got held up behind cars, who were stuck behind cyclists. The sun seemed to have brought every fair weather cyclist out on to the roads. For a cycling advocist it was a great sight. For a time triallist in race mode, it was a little frustrating waiting for big landrovers to overtake the tricycles and riders. Fortunately, I wasn’t too pumped up or impatient, I kind of expected it on this roads.

One mistakes was probably having a 19mm front wheel tyre blown up to 120psi. I always blow my tubulars up really hard out of habit. But, I really felt every bump on the very bumpy roads.

Despite being slowed down quite a few times, I really enjoyed the race. It was a great day to be on the bike, and you feel after several months of persistent rain, it’s about time to get some sunny weather.

I finished in a time of 1:07:26. Which was 1 second faster than the course record. (for original course) whether revised course was harder or easier I’m not sure. There wasn’t much in it. Richard Simmons and Jerenoe Walters of Sigma Sport.co.uk went even quicker in the 2up event to finish with 1.06.36. There were quite a few riders on the 1.09. The fastest women was a junior Anastasia Welsh of Thame Velo 1.27.06. Tom Sefton  of Didcot Phoenix was fastest junior with a good ride of 1.17.19

After race, I started cycling home. I thought it would be a good day to get the first ‘century’ ride of the year in. But, it felt like treading treacle – despite a good tailwind. In the end, I settled for 95 miles. The extra 5 miles didn’t seem worth another 20 minutes of wincing over my time trial bike.

It was the first win of the season. And the longest ride of 2014 to boot. Average Power was higher than last week at Banbury, despite the race being an extra 7 miles. A combination of good weather and improving form hopefully.

I was grateful to the marshalls at one corner for shouting slow down for a tricky right hander. It was greasy under the trees. 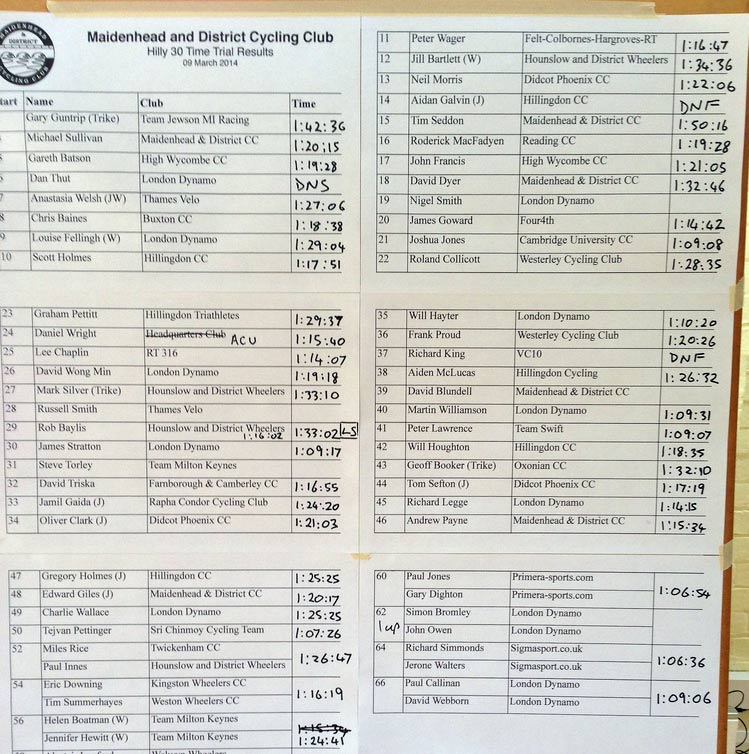