The BDCA 50 is an event on the A50; it was a full field with punters from all other the country looking for quick times on the super-fast course. It’s a big race for the BBAR contenders. After the British time trial championship on Thurs, anything else was always going to be a bit of a let down. I likened racing at Cadwell Park on closed roads to a non-league side turning up to Old Trafford. I don’t know what comparison I can make to racing on the A50/11 – but, it was about as far as you can get from the twisting, undulating closed roads of a motor racing circuit. Before, the start Matt Bottrill was joking ‘ – time to start racing in a straight line again!’ The A50 is certainly one long stretch of straight-road – technical corners don’t come into it; if you like getting you’re head down and smashing up a dual carriageway, for artificially fast times the A50 is as good as it gets.

In the past two years, I’ve done the BDCA 50 and had very good times and very good power outputs. But, today it just wasn’t happening. I suppose hoping for 2 great races in 3 days is asking for too much. I’m glad I had the good form for Thursday. It was also nice to hear appreciative comments from fellow domestic testers who said they enjoyed seeing me up there in the results. 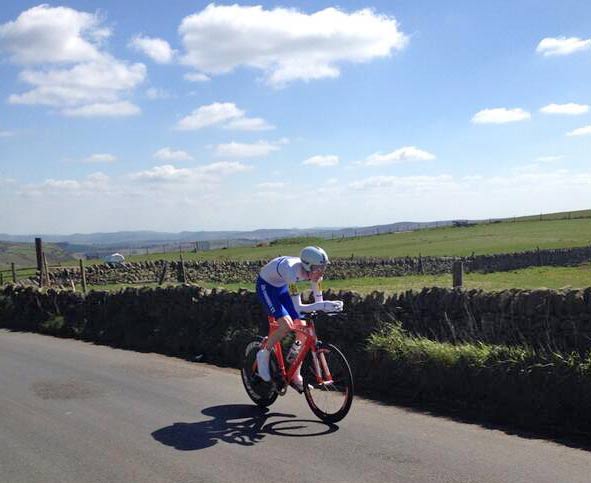 Today, before the first mile was over, I knew I was going to be a long way from last years average power. You can tell pretty soon, what shape the legs are in. I didn’t feel tired, but perhaps the ECCA 100 and the BTTC champs are still in the legs.

The outward leg was a long slog into the wind – a real grind up concrete mountain. The turn was mercifully welcomed, allowing for that super fast tailwind return leg. I did the third 10 mile in 18.17. It was 56*11 pretty much all the way. Despite high traffic volumes, I was being lucky with all the roundabouts – no hold ups at all. But, I got caught with a pedestrian crossing with a few people walking to McDonalds. I stopped for what seemed like a minute. I did think about getting off bike and running through the red light, but I was kind of glad for a rest! At other times, that may have been more frustrating, but it seemed to give an excuse for a slower time than last year. After that stop, I could never really get going again. The power evaporated completely, but with the tailwind and A50 traffic, I was still blown a long at a more than respectable speed. I stopped the clock in 1.42.40. It’s probably a bit annoying when a rider says he has a bad day but still does a 1.42.40 for 50 miles (29.5mph). But, the A50 really exaggerates your average speed. By comparison Thurs’s 30 miles was about 26.5mph.  I would love to race on closed roads, like the BTTC, every week – but it’s hard to see how that could happen.

It was only 23 degrees, which is hardly hot. But, an extra 5-10 degrees can make a big difference. Even with a 750ml bottle, I think I was pretty dehydrated by end of race. It may explain some of the drop off in power. Quite an eye-opener really. I don’t think I was the only one to experience something similar. Adam Topham said he had a tough day too.

Standing on the A50 in a fluorescent jacket may not have the same glamour of helping out at a televised British Time trial champs, but it still needs doing. So big thanks to all those who were waving directions and organising.