Adamo saddles are a unique design of saddles by the company ISM. The basic principle is to cut out the ‘dead’ area on a saddle. Focus saddle and padding on your ‘sit’ bones which is the most important thing and avoid the ‘numbness’ associated with sitting on a conventional saddle. 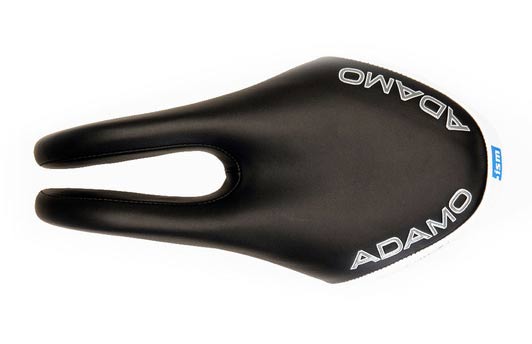 It certainly looks distinctive. This is the ISM, Adamo ‘Breakaway’

Motivations for buying an Adamo

In early Feb, I was doing a 90 minute effort on the rollers on my time trial bike. After an hour, the pain and discomfort in crotch area was really bad. By the end of the session, I just couldn’t bear to be in the time trial position. It felt like everything was getting squashed and numb. I wanted to finish the 90 minutes on rollers, but I could only do it by getting out of the saddle (which on the rollers is tricky)

Also, in last years National 100 (5th in a time of 3.46) the last 10 miles were ruined by great pain in shoulders and groin. I was squirming all over the bike because of the numbness and lost substantial time.

Since, I want to do a 12 hour time trial on the TT bike, I knew something had to change. Adamo saddles have been recommended to me by quite a few time triallists. Not everyone is convinced, but some people seem quite passionate – and it is rare for people to get passionate about a saddle (apart from maybe Brooks). Just looking at the Adamo Saddle made me think it was more comfortable. Like all great inventions and designs, once done, it seems so intuitive to put the padding where you need it and cut away where you just get numbness.

Adamo produce an almost bewildering array of variations on their original saddle. It would be hard to test them all. But, since I was buying for time trials, the obvious option was to buy the time trial saddle. 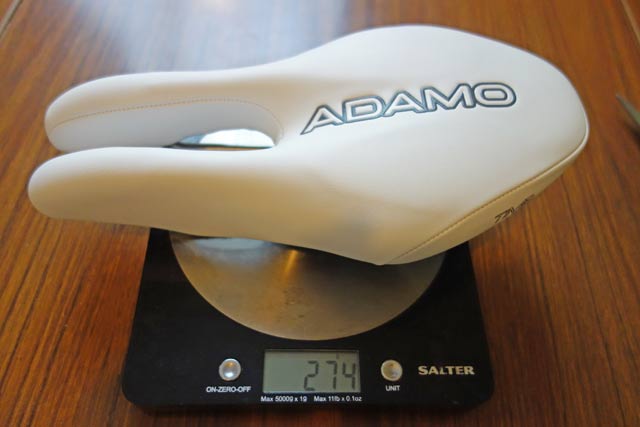 Adamo TT weight 274 grams – lighter than most other versions.

Adamo also claim that  for the time trial saddle:

‘The design allows for increased hip rotation, thus decreasing a rider’s aerodynamic drag and opens the diaphragm for easier breathing. Riders report an increase in wattage due to the more aggressive positioning. Sloped front arms provide extra relief to the superficial perineal space.”

This wasn’t my motivation for buying, but increased wattage seems a good thing.

The first ride was two hours on the rollers on the time trial bike. That’s quite an aggressive position and involved not stopping or getting out of the saddle.

It was a revelation. The improvement in comfort was very marked. I would say at the end of 90 minutes, there was 60% less pain, and after two hours I could still have kept going. That awful feeling of numbness just wasn’t there. This is the most important feature of the saddle, it really does work and makes long distance time trialling less painful.

Since that first roller session, I’ve done two four hour rides on the time trial bike. Again, it is remarkably comfortable for four hours in a race position. I will review after doing a 100 mile race and 12 hours. But, I’m confident that the saddle will make a significant difference and justify its price tag.

It is not to say it is a panacea. After two hours on the rollers, my seat bones (the bones which make most contact with saddle) were a little sore. You could tell they had absorbed a lot of weight. But, it is a very manageable ache, and more noticeable when you get off the bike. To be honest, if I was racing on an open road, I would have moved around more and given my backside more breathing space than two hours on the rollers.

But, to be honest, I was so absorbed in noticing the improved comfort, that I didn’t really notice much difference in actual power I was putting out. Maybe there is an advantage, I would have to retest.

Update after nine months use – One downside of Adamo is that I have had chaffing on the outside of the saddle – on the inmost thighs. You don’t notice whilst cycling, but after it has been raw and I’ve been putting on Sudocrem – it’s not a show stopper, just a bit irritating. 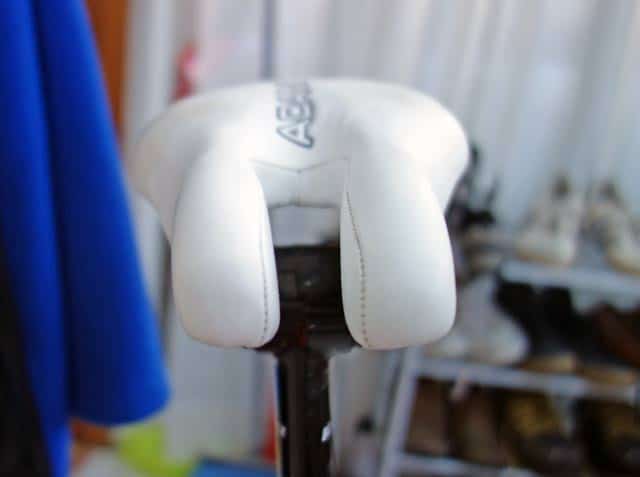 It sits higher than conventional saddle, so I had to lower seat post and re-check saddle height. Apart from that it was quite easy.

It’s not great for putting a saddle bag on bike (though most don’t use a saddle bag with TT bike) But, is probably good for tieing some spare tub underneath.

In one sense the Adamo is a really fantastic product. But, there are one and a half reasons to be marginally dissappointed.

I have to admit I didn’t research the buying process too much. I assumed the time trial model would be designed for well time trials. I was really dissappointed to see they had added this substantial ‘lip’ at the back of the saddle. As an aero weenie, this is like getting your tightest body fitting skinsuit and then wearing a scarf because you think it might get cold. 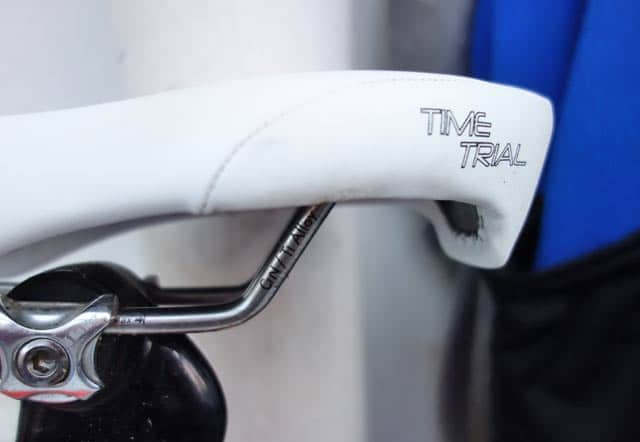 I can’t look at my saddle without wanting to get out a hacksaw and cut off this offending piece of drag resistance.

It seems such a school boy error to go to all that trouble to design a really excellent product for a time trial and they put this wind-block on the back.

Looking through the ISM website, I notice that they claim this lip as a selling point. They say for triathletes, it makes hanging your bike up easier. This makes it even worse! So it’s not a time trial saddle it’s a triathlon saddle for people who are not fastidious aero-weenies!

Also, I wonder if it is is possible to put a bottle cage on the back of this saddle. It was hard to fit a saddle bag.

The second small disadvantage is the weight. At 275 grams it is 200 grams more than my hill climb saddle. For your average rider, 275 grams for a saddle is no big deal. But because I do many hill time trials and hill climbs on my TT bike, it’s a minor disadvantage.

In an ideal world, I would switch saddle depending on the event, but the Adamo sits higher than a conventional saddle, and when you switch you have to adjust the seat-post height. I prefer to keep same saddle on all season. I will only get change the Adamo  when I do 3% hill climbs, like the Cat & Fiddle / Long hill  in September.

To be fair to Adamo, I guess the weight partly comes from the greater padding comfort. Perhaps it is difficult to have the best of both worlds – low weight and incredibly comfortable.

The shape of the Adamo means that many rear mounted bottle cages don’t fit. Two which do fit the Adamo are

If you do long distance time trials (i.e. over 50 miles) I would say this is a must buy. It really is comfortable and can make the difference between finishing in tremendous pain and being able to go to the limit. This can save you time.

For a conventional road bike, my need for an Adamo is less. I get some numbness, but it’s not as bad as a TT bike. I don’t need to immediately spend £100 plus just to get an Adamo saddle. However, if I was building a training / touring bike from scratch, I may choose an Adamo as my first choice saddle to get the most comfortable ride.

To me the time trial version has two disadvantages, but it won’t stop me using them and to other people they probably won’t seem such a big deal. 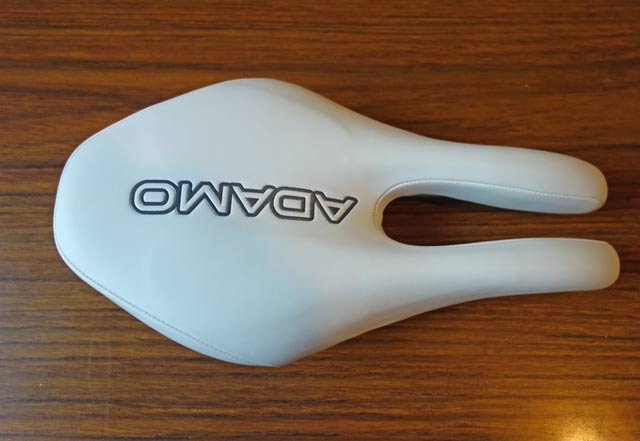