This week, I’ve been cycling around Oxford delivering letters inviting people to a concert. It’s a bit old school to be using snail mail rather than these modern forms of electronic communication. But, in a way its a lot of fun cycling around Oxford looking for addresses. It’s a nice and easy training session. Going up to Kidlington and back gives a good 25 miles, for 2 hours of level 1. It’s not too often I average 12.5mph for a training ride, but it’s something a bit different.

Since the national last week, I’ve had a couple of hand written letters from 2 really old school time triallists. Keith Williams of the Oxford CC, and Brian James of Brighton Mitre. Both these ‘experienced’ riders are regulars of the time trial season. I often bump into them at races and have a chat. Brian James has been my minute man on the Bentley course, more often than you would believe. I used to ride with his son Tom at OUCC.

I wouldn’t want to guess their age, but I imagine they were born in an era where the closest to social networking was the good old fashioned telegraph cable. Hand written letters are so rare – it’s quite a thrill to get something through the post, which isn’t an electricity bill or an estate agent offering to sell your house. 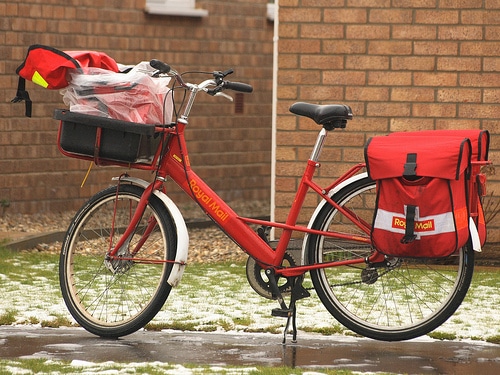 The thing about delivering letters, is that the bicycle wins hands down. Delivering on foot would be painfully slow. Delivering by car would be no fun. Always getting stuck in traffic jams, finding somewhere to park, stopping / starting, one way systems. The bicycle is the perfect medium for delivering letters. If you treat it as a low level training session, it doesn’t even matter if you get lost and end up doing U-turns up and down Cumnor hill because you can’t find one road.

Though as much as I love old school technology, I have to admit to sometimes relying on the young pretender of the ‘Google map App’ it is magically good at showing you the way to go. Is it more fun than looking at a map? I’m not sure.

I was kind of lost in Botley, going up and down this hill, stopping to look at a map. A gaggle of young school-children thought it was great fun watching this cyclist going up and down a hill looking for addresses. Their parents spoke to me saying the children thought you must be a great cycling champion. It was interesting how much joy young children were getting – just  from seeing someone just cycling up and down a hill. One thing I can never claim is to be the fastest postie on a bike. That is undeniable Matt Bottrill. Matt works full-time as a postman, but still finds time to train with great focus and intensity. It enabled him to get on the podium of the British Time Trial champion this year, beating quite a few professionals into the bargain. He also recently won his first senior national title, after several years of trying (100 mile TT in 2012) and 50 miles – , and circuit TT in 2013.

But,  delivering letters on bike is far removed from the world of competitive racing. It’s just a good reminder that the bike really is a great invention.

2 Responses to Postie on a bike