Until yesterday, I hadn’t done a 10 mile time trial for ages – but, like the proverbial buses, two have came along together this weekend. Today was supposed to be a 25 mile time trial on the H25/2 course, but roadworks on the A4 put paid to that. Still, it was good to get a race at all, and the way my legs felt, I wasn’t too dissappointed it was cut short.

Without any particular fast 25 mile times in the past three years, I was seeded number 40, off at 8.10am. This meant a relatively early start – especially after racing last afternoon.

I always struggle to race early in the morning, and today was no different. Yesterday I averaged 338 watts and felt I was flying. Today I was 20 watts lower – 318 watts, and it felt pretty grim. The spark just wasn’t there. I felt like an old motor car, which was struggling to get into fifth gear. I can’t complain too much though, I still managed to scrape in another 30mph ride. 19.59 for the 10 miles on the A404 (H22/10) course.

I’ve never done a 10 mile TT on this course before. But, it is a fairly fast dual carriageway so times are relatively quick. There isn’t much climbing, though there is a little drag towards the end of the first half. There was a light northerly wind and pleasant sunshine. It might have been a super-quick day, but for the big block of high pressure sitting over Europe.

There was a time when I spent several seasons trying to do a 30mph ride, I had a succession of times sub 20.10, but never made the magic 19, but now the 30mph+ rides seem to be coming in droves (well perhaps ones and twos). But, I’m not alone in getting  30mph + rides. It’s amazing how much times have improved in the past few years in timetrialling – it seems people are really learning the art of aerodynamics – pushing down times through cutting down on drag. By the way, the BBC have stated Bradley Wiggins has a reported CdA of 0.176 – I don’t really know what this means, except that Wiggins is super-aerodynamic and will cut through the air very fast)

The problem is that with all these technological improvements is that a 19 is now no longer the holy grail it once was. Of course, there was a time when riding a 25 mile under the hour, was quite an achievement – that seems a bit quaint now. They say in the 2010s an 18 is the new 19 or on the V718 a ’17  is the new 19. (I appreciate that last sentence sounds like gobbledygook, and if you’re not immersed in the sub-culture of UK timetrialling, it probably is!)

Back to more meaningful comparisons of performance. What position did you finish?

Like Sat, my time was good enough for 2nd place. 1st place was Rob West (RST Sport / Aerocoach in a time of 19.47). 1st Women was Danuta Tinn Maidenhead & District CC (23.50)  I think Rob has benefited from considerable effort into improving aerodynamics.

Power and time of the day

Overall, I’m happy with the weekend. Firstly my new stages power meter I got this week suggests my Quark is under-calibrated by 25 watts. Hopefully for the future, I have quite a few easy aero improvements I can make, and perhaps a few difficult ones too.

Sat was better than expected in both power and time. Sun was lower power than expected, but a good time. I was quite surprised to have a drop off of 20 watts from one day to the next. I don’t believe this was due to tired legs. I believe it is because I just don’t perform as well early in the morning.

I could overcome this to some extent by training early morning rather than afternoon. All my training is currently in the afternoon. But the problem is I find mornings hard work and the idea of cycling really hard – never appeals until I’ve spent a few hours to digest my  early morning coffee and breakfast…

Big thanks to the stalwarts at West London CA for putting on another good race. I did offer to marshall for this race, with the proviso that I was also happy to enter too. The organiser said he appreciated both an entry and marshalls and left it up to me. This time I chose to race, but, next early morning I may choose a cup of coffee, and sitting on a roundabout! 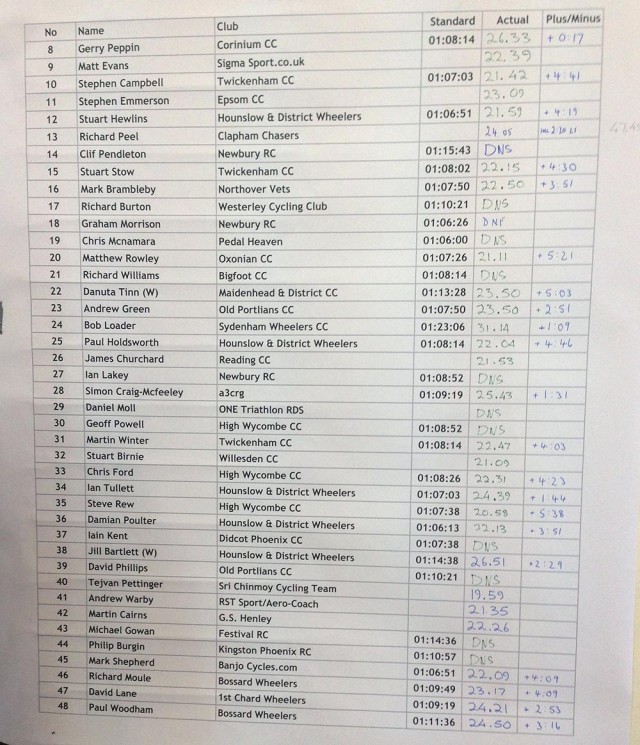 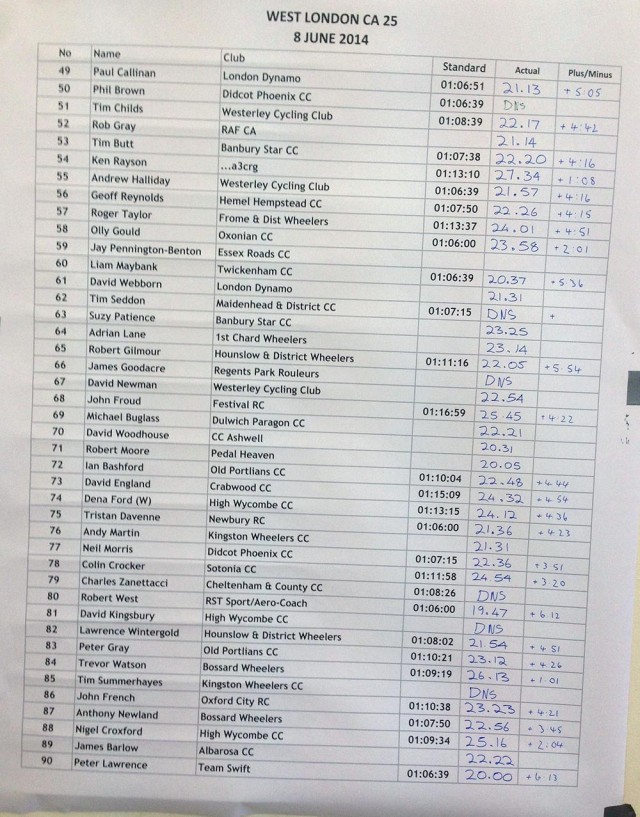