When in Dublin, I was surprised a friend had no idea about the basic rule of roundabouts. He cycles into town everyday, but didn’t know at roundabouts you are supposed to give way to traffic coming from your right.

I only noticed because at one roundabout. I waited, and he just cycled on into the path of a car causing it to slow down. He was actually surprised to learn you were supposed to give way. Maybe he spent too long in Paris, where it really is ‘first come, first served’

The Basic Practical Rules of Roundabouts

Rules When on Roundabouts

If you feel unsafe at very large roundabouts, you can always dismount and go across each intersection. 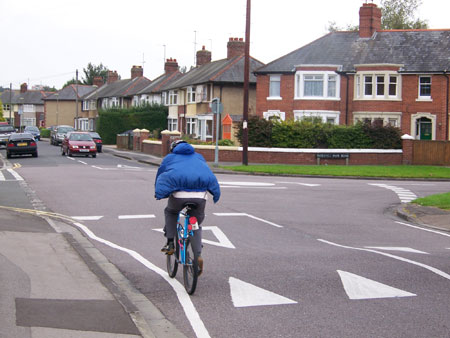 Mini roundabouts are becoming increasingly common. But, by experience suggests people become even more insecure about who has right of way – or people forget.

If the cyclist was turning right, a majority of motorists do not give way, but keep going straight across the roundabout. If you are not aware that most cars will keep going, an accident is quite likely. For some reason, motorists / road users don’t see the give way markings on the road or don’t really see it as a roundabout.

This is on my commute home. It is very rare a car, will stop to allow you to go round the mini roundabout and come off. If you want to avoid an accident, the onus seems to be on the cyclist to give way to the motorist driving straight on. I’ve learnt from experience, never expect the car to give way.

Also, with mini-roundabouts. If you are turning right, it helps to signal turning right. Rather than for a big roundabout, where you would signal left to come off the roundabout.

This was Hyde Park Corner roundabout in London. This guy on Boris bike was really struggling on the four lanes of roundabouts.

Some roundabouts are just too big, busy for cyclists to feel safe. This can be a major deterrent for cyclists making a journey to work.

This is Headington roundabout in East Oxford. There is actually an underpass under the roundabout. It is not ideal, because signs tell you to dismount, it takes ages to walk.  But, it’s worth taking the safer underground route. 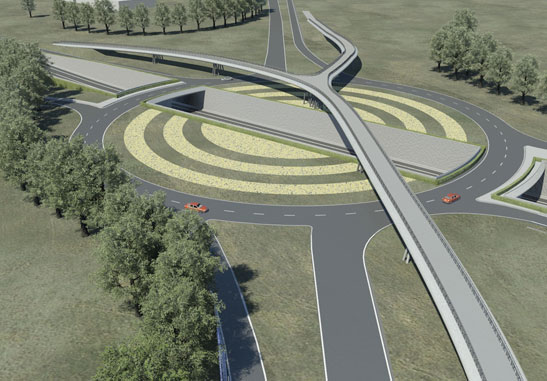 Unfortunately, the lack of planning has left many roundabouts which are deterrents for cyclists. But, usually there is a solution, such as avoiding the roundabout or walking around.

The Highway code on Roundabouts

160. On approaching a roundabout take notice and act on all the information available to you, including traffic signs, traffic lights and lane markings which direct you into the correct lane. You should

• use Mirrors – Signal – Manoeuvre at all stages
• decide as early as possible which exit you need to take
• give an appropriate signal (see Rule 162). Time your signals so as not to confuse other road users
• get into the correct lane
• adjust your speed and position to fit in with traffic conditions
• be aware of the speed and position of all the traffic around you.

161. When reaching the roundabout you should

• give priority to traffic approaching from your right, unless directed otherwise by signs, road markings or traffic lights
• check whether road markings allow you to enter the roundabout without giving way. If so, proceed, but still look to the right before joining
• watch out for vehicles already on the roundabout; be aware they may not be signalling correctly or at all
• look forward before moving off to make sure traffic in front has moved off.

162. Signals and position, unless signs or markings indicate otherwise.

When taking the first exit
• signal left and approach in the left-hand lane
• keep to the left on the roundabout and continue signalling left to leave.

When taking any intermediate exit
• select the appropriate lane on approach to and on the roundabout, signalling as necessary
• stay in this lane until you need to alter course to exit the roundabout
• signal left after you have passed the exit before the one you want.

When taking the last exit or going full circle
• signal right and approach in the right-hand lane
• keep to the right on the roundabout until you need to change lanes to exit the roundabout
• signal left after you have passed the exit before the one you want.

When there are more than three lanes at the entrance to a roundabout, use the most appropriate lane on approach and through it

163. In all cases watch out for and give plenty of room to

• pedestrians who may be crossing the approach and exit roads
• traffic crossing in front of you on the roundabout, especially vehicles intending to leave by the next exit
• traffic which may be straddling lanes or positioned incorrectly
• motorcyclists
• cyclists and horse riders who may stay in the left-hand lane and signal right if they intend to continue round the roundabout
• long vehicles (including those towing trailers) which might have to take a different course approaching or on the roundabout because of their length. Watch out for their signals.

164. Mini-roundabouts Approach these in the same way as normal roundabouts. All vehicles MUST pass round the central markings except large vehicles which are physically incapable of doing so. Remember, there is less space to manoeuvre and less time to signal. Beware of vehicles making U-turns.

3 Responses to Rules and practical advice for roundabouts