Porlock up the A39 is probably the hardest and steepest A road in England. It is a really testing climb. Very steep from the bottom, then a long way to the top. I rode up the hard way after the race up the toll road.

Sunday 29th was a 4 mile hill climb up Porlock Toll Road, organised by Minehead CC. The road was closed to traffic and it was a really great event, enthusiastically promoted by Minehead CC with support from Porlock toll road and Porlock village. There was also a very generous prize list sponsored by (www.exmoorexplorer.com). – a big mountain bike race held each August.

Porlock hill climb Toll road to the right, A39 climb  to the left.

Despite travelling around the country quite a bit, I rarely go further south west than Bristol. I’ve done very little riding around Somerset so it was a great opportunity to start riding some of the Exmoor climbs.

The village of Porlock is quite charming and for a hill climber, seems inundated with great hill climbs at every junction. (hill climbers heaven or hell, depending on your point of view!) The A39 main road climb out of Porlock features number 4, in Simon Warren’s 100 Greatest hill climbs. (rated 9/10) At 25%, it is reputably the steepest A road in the country. However, the race was to be held on the alternative climb – Porlock Toll Road. This is a fantastic climb – 4 miles of pretty constant 5-6%. The road surface is good; and it’s as close to riding an ‘Alpine’ style climb as you will get in the south of England.  On the lower slopes it is mostly in sheltered woods, though every now and then you can get a glimpse of the sea to your right.

There are two 180 degree switch backs. It’s a great feeling when you’re climbing and can see the road down below you’ve just come up. Towards the top, the climb shallows out, and is a bit more exposed. I rode it once before the race started and liked it straight away.

I believe it is the first time that a race has been held on the whole climb, so it was hard to gauge how long it would take. I thought it would be a little like Snake Pass, just a bit longer. I started off reasonably hard. The hill is slightly steeper on the bottom. It is a good hill to get in a rhythm and I stayed in the saddle all the way to the top. The 180 degree switchbacks were interesting. I’m not used to racing on these kind of climbs. On one corner, I had to touch my brakes as I was running out of road. Towards the top, the trees disappeared, and fortunately a tailwind gave a little help to the finish. The gradient also became a bit shallower for the last mile. I finished in a time of 13.24 (just under 18mph) This was enough for first place, and I think I can claim a course record.

It was also nice to get quite a few cheers from a surprisingly large number of spectators and marshals by the side of the road. 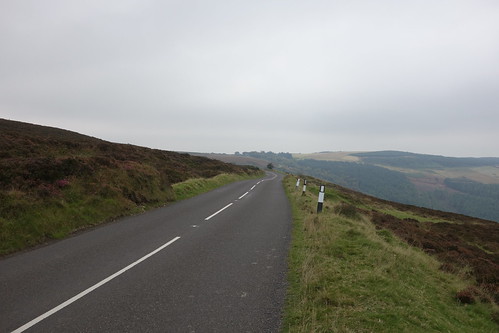 After the race, I couldn’t resist having a go at the other Porlock hill climb. It’s been a light week of training and it’s not often you get a category two, 370 metre hill to have a go at. That’s a real brute. A wicked section of 25% at the bottom and then another couple of miles long slog to the top. I’m sure many were glad to be racing up the toll road!

After the race there was a prize ceremony with former world champion Wendy Houvenaghel giving out the prizes. The whole event was really good, you felt a lot of work and enthusiasm had gone into it from members of Minehead CC, and it was nice to see it pay off.

One nice touch, the village of Porlock were really keen to encourage the event, helping us to have good facilities and a local womens group did the refreshments.  I also received a homemade trophy by local schoolchildren. Very cool. Perhaps we can suggest something similar to the residents around Box Hill in Surrey.
Some photos of Event

Tejvan Pettinger at the start. What you might call hill climbers arms. 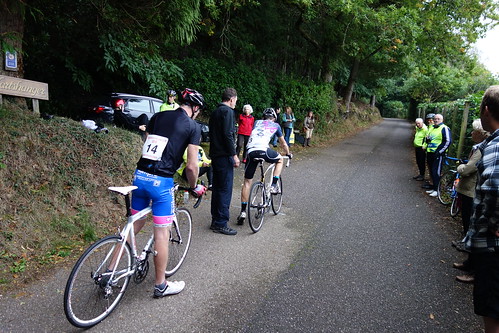 Fortunately, it was a warm day.

Using muesli bars to prop up rollers on the grass. 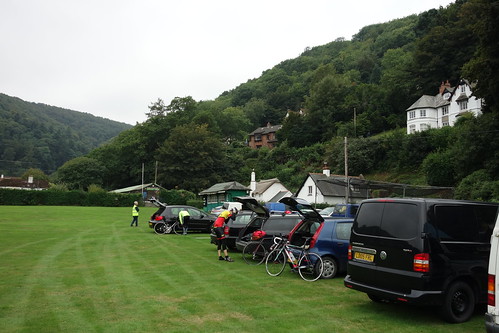 View from the hill

After the event, the road was kept closed to traffic to allow other people to have a go at climbing the hill with car free roads. Quite a few people took advantage.

Thanks to Vilas for many photos. And again thanks to those who helped put on the race. Hopefully, the event will be held same date in 2014.