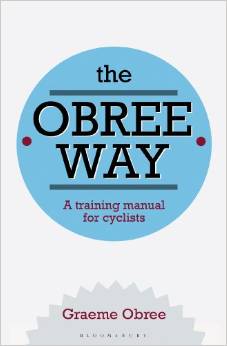 I reviewed the Obree Way last year, but it cost £30 (which was a bit pricey even for a good book.) But  I see it’s available in paperback for £11.99 now. The Obree Way

The Obree way is Graeme Obree’s unique and distinctive approach to training. It is an approach to training Obree developed himself over many years of his own successful cycling career. The book is worth reading just from the perspective of gaining an insight into the training and mentality of a World Champion, you also gain the feeling the author really put is heart and soul into the book. I think every cyclist will be able to pick up something from this training manual.

One thing I liked about reading the book is that I always felt Obree was just sat across the room talking about his training. It was like listening to an old club hand share his training secrets. But, in this case the old ‘club hand’ happens to have held the prestigious world hour record on two occasions and also is a former world champion. Obree’s pedigree definitely is important. If some of these training principles were explained by Tom, Dick or Harry you might be tempted to brush them off as being too obvious or too simple. But, if they worked for Obree, you give them much more importance.

Essential Aspects of the Obree Way.

Turbo Trainer To Obree, the turbo trainer is a key element of his training. It’s not something just to use when the weather turns icey, but even in the middle of summer. Obree wants to have the ability to very carefully monitor his progress and make sure a training session actually stretches his previous effort; the best way he feels is to use a simple turbo training carefully calibrated to measure exact performance. At this point, in the book I did think perhaps the same could have been achieved from power-meters. But, Obree’s way is largely to ignore computer data. (He says the only time he really uses a heart rate monitor is to make sure on a recovery ride, you stick to a recovery ride.)

Obree doesn’t believe in intervals. To him the best training is to replicate the kind of race you will be doing.

“Specific training for specific events. Everything else is peripheral and less effective than the base truth of athletic performance enhancement.”

If you are doing 10 mile time trials, a key training session is to do a 20 minute ride on the turbo as go as fast as you can. Later in the training cycle, after a sufficient time period to recover (could be several days). You have another go at this 20 minute ride, but aim to improve on your previous performance. The simple aim is every time you do one of these ‘key’ training sessions you push your limits and go faster than before. This is the simple training principle of ‘stress and recovery‘ You keep pushing your limits, give yourself chance to fully recover and then push your limits again.

Another important training session for Obree, is the ‘glycogen ride’ This is a two hour ride, where you adapt the body to riding with low sugar levels to improve the body’s use of glycogen stores when racing. He says you should finish this training session really exhausted and ready to devour food (which you have prepared beforehand)

Obree also advocates incorporating a session of strength training. This involves pushing a huge gear on a gentle hill at a very low cadence.

One of the most difficult things I found in the book was the length of time Obree was willing to devote to recovery. He says some training sessions might take him 4-5 days to recover from. On these recovery days, you can go out and spin your legs. But, it is important to keep it at a recovery level. Obree mentions (without a trace of false modesty) that on one of these recovery rides, he was dropped by guys on mountain bikes. That takes something – to be a world champion, but to have the inner confidence to get dropped by some overweight guy on an MTB doing 15mph. That is another element which comes through the book – A single minded determination. To Obree most of your training has to be done on your own, otherwise you won’t be doing the kind of training that you need to gain optimal performance.

Obree even suggests that to get to the peak of your form, you have to be willing to sacrifice a program of racing every weekend as this seven day race cycle can interfere in your optimal training program. If you are always racing, you inevitably taper for race, and this prevents the training and sessions which really improve your performance.

Whatever you think of Obree’s training methods, his thoughts on the mental approach to training are very illumining. You gain a very clear insight into the mentality and approach of a world champion. Obree makes the very astute observation that many people enter sport with the Corinthian ideal of giving it a good shot, and enjoying the social aspect. We may try very hard at times, but we hold back from giving it 100% because we can’t quite get into the mentality of striving to be our absolute best. As Obree says:

“Learn to challenge the option that says. “I have tried hard enough’ – there is always, regardless how small, some gas left in the tank.

To Obree, there is a strong correlation between our mental approach and thinking in the right way and also our physical performance. I found quite a few similarities with an article I wrote on pushing the limits.

One thing I like about this book is the simplicity and honesty. I’d read it in two days, partly because I found it very interesting, but also because it is short. From a commercial perspective, it might have made more sense to pad it out with a few usual things you find in most cycling books. But, you feel Obree only wanted to put in what worked for him. And if it wasn’t relevant – he wasn’t going to put in. There are quite a few personal anecdotes like several references to the benefits of mashed sardines and toast. (though no reference to the ubiquitous marmalade sandwiches which were often touted around world hour record) He doesn’t hold much truck with commercially packaged recovery drinks and food. Obree suggest ‘real food’ as he calls it, can’t be improved upon. He’s also quite honest about equipment making observation, you can spend a lot of money but only make a very minimal difference to your speed.

Generally, I like the shortness and simplicity. It helps to highlight the essentials. However, one area where I would have liked more details is the training chapter. After reading the chapter, I felt like wanting to ask more specific questions. An example of an actual monthly training diary would have been interesting.

Obree makes a strong case for stretching everyday. He believes that stretching plays a key role in re-energising muscles and help a smooth pedalling action.

This is another area Obree believes is important, and Obree gives tips on developing a smooth pedalling action. Also, Obree says crank length is very important, (which made me feel a bit embarrassed for having no idea what crank lengths I ride. I can tell you how much my saddle weighs to the nearest gram, but not something important like my crank length.

There is a whole chapter devoted to the ‘Obree breathing technique’. This is perhaps the most interesting part of the book. I’ve never come across the idea of trying to improving your breathing technique, which is perhaps surprising given that breathing must be pretty important in an aerobic sport like cycling. I will be trying this.

(Note: This is just my rough overview of the breathing technique. For a full comprehensive guide, I would advise consulting the book.)

I did try a couple of years ago, and these were my observations.

However, I can’t say I do it now

What will I take from this book?

Overall
A good book, of particular interest to time triallists, but also of interest to any cyclist interested in improving their performance.
Kindle download from Amazon.co.uk – The Obree Way – only £6.34
External pages