I’ve often written about cycling in New York. Unfortunately, it’s hard to write anything too upbeat or positive. Cycling in Jamaica, Queens is really for the brave / foolhardy. In Manhattan there may have been a growth in cycling – even a cycling revolution. But the revolution is yet to reach the outskirts of the New York borders.

The first thing that strikes you about cycling in Queens is the paucity of any other cyclists on the road. If 0.1% of journeys are made by bicycle, I’d be surprised. Subconsciously you start asking – What do people in New York know that I don’t know? Is cycling illegal in New York? 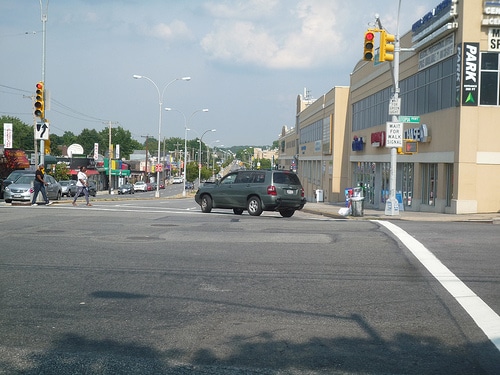 It seems quite a few motorists seem to think so. You can be cycling in the gutter, and big SUVs beep at you  – not because you’re in the way, but, well simply because they can. I was doing some interval training on a wide quiet road near Douglaston. It was really quite frequent that cars would beep their horn. The strange thing is that the road was so wide they could easily overtake without even slowing down. In England you might get beeped if you’re cycling up Snake Pass two abreast – there motorists really do have to slow down for 10 seconds. But, in New York, your simple presence is enough to irritate some drivers.

The other thing about cycling in New York is that it’s very slow. This is because of the road set up and traffic lights. You can wait for ages at traffic lights, even though there are no cars. If America replaced traffic lights with roundabouts, they could probably increase their GDP by at least 1%. Perhaps it wouldn’t be practical in lower Manhattan, but there are many lights where you will wait for nothing.

The standard of driving in New York is shocking. If you stand anywhere at the roadside, you will quickly lose count of the number of drivers who are either eating a hamburger or using their mobile phone whilst driving. I’m only surprised I didn’t see someone doing both at the same time.

My riding in New York was a curious mix of short, hard, intense intervals and slow recovery rides. On the recovery rides, I could come back with an average speed of 11-13 mph. I remember one ride I went to quite a big cycle shop on Jamaica Avenue to buy some cycle energy powder. The visit proved in vain, they didn’t stock any food products because the owner told me the staff just ate them! It was really funny how he said it; he really was serious, he even brought out a fat lad from the workshop to prove his point!

Disappointed not to get any energy gels or energy powder I returned to  Cunningham Park and did some more  riding. 13 miles took me 1.11.12 for an average speed of 11.3mph (even with auto stop / start). By comparison 68 riders in the National 10 mile TT averaged over 30mph. This is an absolute record for the lowest ever average speed recorded on a bike ride. The intervals were pretty intense; it really teaches you how to do a proper recovery ride and not one of those – 20mph, sneak a few KOM type recovery rides.

I remember vividly my first ever recorded bike ride on a mountain bike, aged 13 or 14. I had a speedo and averaged 13.5 mph for a 36 mile ride to Burnsall. The next ride I smashed that average speed and managed 14.5mph. 20 years of intense training later, and I’ve managed to average a paltry 11 mph.

It’s not all bad cycling in Jamaica, Queens. There is an outdoor velodrome at Kissena Park, which is usually empty.

There are also some very nice cycle paths near Cunningham Park. 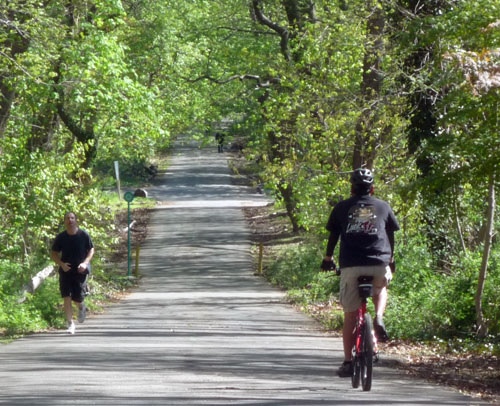 NYC Greenway, Cunningham park. An oasis in the desert.

If you know the roads you can find some alternative routes, which are quite good. I used to suffer cycling along Union Turnpike, but have found a back road way through St Johns College.

Also, if it’s possible to discern, I think there are more cyclists on the roads, than when I first visited 10 years ago. 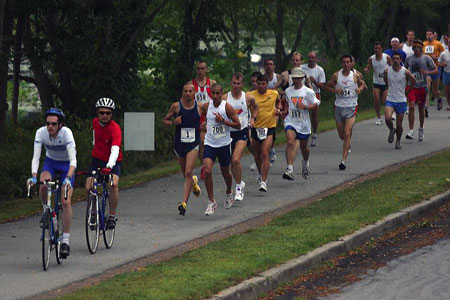 Another epic slow cycle was being the lead cyclist for the Sri Chinmoy Marathon at Rockland state Park. It was an early start and I forgot my cycle shoes. I had to ride 26 miles on speedplay pedals, using ordinary shoes. That was a real pain.

I did get some good interval training in – mostly short and fast. It was curious that I could cycle uphill at 18-20mph, but still come back with average speeds of 11-13 mph. 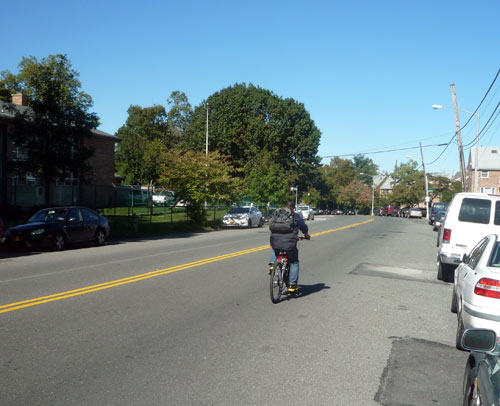 ‘Sanitation hill’ – a favourite for interval sessions. Also, another cyclist just to prove I wasn’t the only one.