Whenever I hear Jeremy Clarkson make an irritating comment about cyclists (like why are they in middle of lane?) My instinctive reaction is to think –  why don’t you try cycle through London? It might give a very different perspective.

To be fair to the great controverst (1) yesterday, finally saw Jeremy Clarkson get on a bicycle, (dressed up in suitably ridiculously looking yellow spandex with labels still showing). Top Gear is a mildly, tongue in check comedy – relying on the ‘cheeky chappy’ humour of three ageing men. It was never going to be a balanced investigation into the world of sustainable transport in London. It was never going to be a sympathetic look at the difficulties cyclists face – you can always get a few more laughs by talking about putting toothpaste (chamois cream) in your nether regions than you can talking about the optimal space to give people on a bike. But, overall, I thought it was good, even if some parts were rather cringeworthy.

Some of the public service videos they made, warning of the dangers of cycling where wickedly funny. The video with martin Luther King, Gandhi and John Lennon getting assassinated with the end motto ‘righteousness is no guarantee of safety’ appealed to a black sense of humour, though I felt suitably guilty for laughing at the same time. 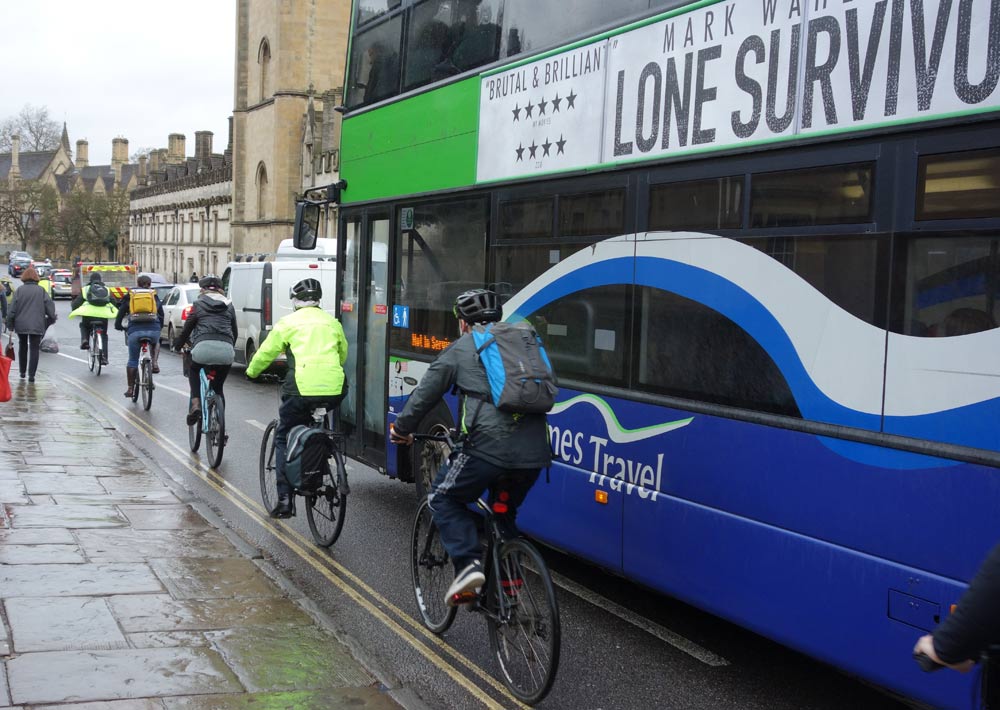 Amidst all the usual generalisations of cyclists and cringe worthy characterisations, it was still kind of cathartic to see Jeremy Clarkson cycling squeezed precariously between two big buses and having great difficulty turning right. This is the real reality of cycling in London.

On a serious point, if you’re having difficulty turning right – trying taking a more central position in the lane. You can’t always ride in the gutter and rely on your bright yellow jacket to get in the best position.

He might not have admitted it in the video, but a few hours cycling around London, must have given some insight into the difficulties faced by cyclists. And it’s something I wish other people would do (especially those newspaper columnists from the Daily Mail et al.)  The best way to promote better road manners is to have greater empathy and concern for the well being of other road users. If you see cyclists as an alien species who only annoy people by going through red lights, you won’t be inclined to give them space or time. But, when you’ve struggled to turn right yourself, you might just have a little more patience with a cyclist moving away from the gutter trying to turn right.

Clarkson made a claim he was given plenty of room by all taxis, vans and cars (which I don’t believe for a moment). But, you know with Clarkson there would have to be a new group to blame. Yes, buses are hard.

(1) (I think I might have just made up this word, but it means – he who enjoys being controversial)