Following up from Road fatalities in the UK  this post looks at fatality rates going back to the 1920s.

Reading a book – the History of Time trialling by Peter Whitfield I was struck by some statistics about the level of road fatalities, during the 1930s and 1940s. 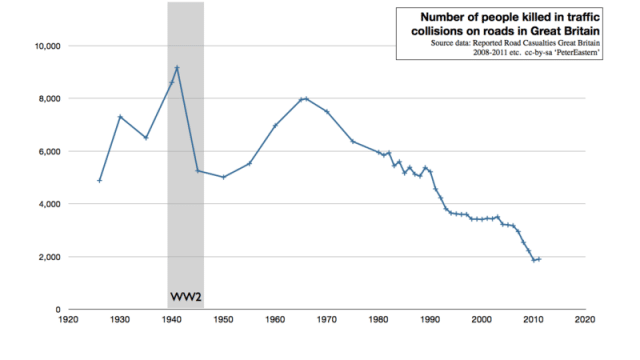 Despite road traffic being only 10% of today’s levels. Road deaths reached nearly 10,000 a year. There were up to 1,000 road fatalities a year of children under 10.

Yet, despite these shocking statistics, there was a widespread acceptance of these deaths. Nearly all road fatalities were put down as ‘accidents’. It is quite a shock to learn that during the Second World War – 50,000 people were killed on British roads (Source: Time, Speed and Truth, P.Whitfield)  – This was a greater number of fatalities than the blitz (where 40,000 civilians were killed in air raids)

In 1925, Temple Press published a ‘Safety hints for motorists’ which amongst other gems of wisdom, they advised

Implications of these attitudes