This Sunday is the National Hill Climb championships at Long Hill, Whaley Bridge promoted by Buxton CC. It will be the end of the season and the climax of the hill climb season.

I’ve had my best year on the hill climbs. I’ve won 10 races out of the 10 I’ve entered. Yet, to use the clichés of football managers – ‘you’re only as good as your last race.‘ And ‘at the end of the day, it will be the fastest man on the day.‘  – at least it’s not a game of two halves.

It’s interesting looking at the previous winners of the National Hill Climb Championships You have some of the best all-round British cyclists, riders such as Brian Robinson, Paul Curran, Malcolm Elliot, Chris Boardman, Jeff Williams and Stuart Dangerfield, and then you have the real hill climb specialists like  Granville Sydney and Jim Henderson. It’s the kind of race where you can get a variety of winners and it is also hard to predict the outcome of this year’s race.

In 2010, I broke the course record 12.26 for Long Hill. I was happy to hear it had been chosen as National because I felt I did better on longer hills. But, now I’m not so sure, and would be quite happy if it suddenly developed a section of 25% at the end.

The thing about hill climbs is that different kinds of hills can suit very different riders. Someone who could win at Catford (2 mins of 20%) would probably struggle on this kind of climb. It’s tempting to spend time on thinking of ‘your’ perfect hill. But, you just have to ride what comes up and hope you can do well. At the end of the day, there is a height gain of around 230 metres so I just hope I can be the quickest.

The other thing is the wind. There is a big difference between tail wind and head wind. As a rider you instinctively prefer a tailwind (it’s much more fun racing up a hill at 22mph than 19mph) Whether a tailwind would give me an advantage or disadvantage I can’t really work it out. But, to rely on another old cliché – ‘it’s the same for everyone’.

I don’t tend to get nervous before cycle races. I like to do well, but I also like to be detached about the result. If you don’t win, you still need to be able to enjoy the race. If anything 12 minute races are less prone to nerves than a short 3 minute sprint up a hill. I was interested to read what Chris Boardman said about his first hill climb Championship on Nick O Pendle 1988 – saying he was nervous about getting it all out in 3 minutes)

At this time of the year, it’s tempting to start looking at the results and think, if X can beat Y by 5 seconds, and if I can beat Y by 7 seconds then I should beat Y and X e.t.c. But, then you think why bother, let’s just race.

Then it will be very interesting to see what Michael Hutchinson can do. He is a self-confessed non-climber. But he came second in 2002 when the Championships was held on the Cat and Fiddle (a similar 3% gradient) won by Mark Lovatt. Hutchinson is a serial winner of National titles and is in my view a world class time-triallist. I reckon in a flat 10 mile time trial he would put over 1 minute into me. We shall just have to see if the height gain of this 4.4 mile time trial is enough to shift the balance in the favour of the hill climb specialists. 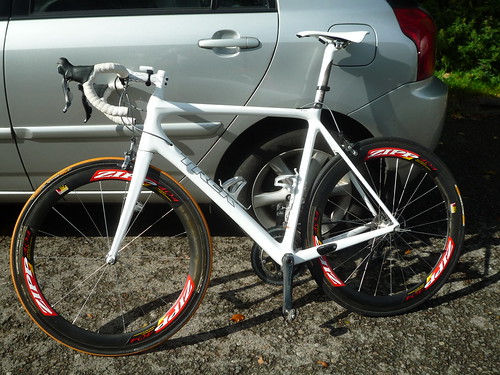 I won’t be doing too much to my bike. I will swap a 39 inner ring and replace with a 42 inner ring this is to get a better chain line and avoid having to switch between 53 and 42. I could take off the outer ring to save 90grams, but to be honest it’s not worth it. I’m fairly set on using a road bike with clip on tribars – but with a gnawing feeling a time trial bike may be even quicker. I did consider cutting off the bottom of my handlebars but I might end up using drop handlebars on last section to line.

In the 1970s, my meditation teacher Sri Chinmoy and about 300 Sri Chinmoy Cycling team members did a 24 hour cycle race in Central Park New York. They had been training for the previous 6 months or so. A week before race, Sri Chinmoy said:

“Next week, it will be only you and your cycle. Give your heart and soul in that day. Nothing is as important as  competing with your best effort.”

I thought this is great advice for any race. It makes you concentrate about just giving it your all, and not worrying what other people might do.

If possible I will try to enjoy the event, whatever happens.