I need the results for 2010 National Hill Climb as they are not on the internet.

Photo thanks to – The Taylor

Earlier in the year  I had ridden Dovers Hill, and done 4.03, so I mostly knew what to expect. After winning so many hill climbs this season I thought I had a chance of a medal; in the end it was very close, just missing out by 1.1 seconds on third place.

Warming up with umbrella

Dovers Hill is a fairly standard British hill climb course –  1 mile / average gradient 10%, and has been used a few times for the hill climb championship. The road was closed off to traffic and at the top there was a lot of spectators.

It was mild, but with frequent showers. I was lucky to have a team mate, Vilas, hold an umbrella during the worst showers whilst on the turbo.

A competitor on climb

I paced the climb fairly well. Start fast and just try to hold on. By the half way point you are feeling pretty stressed, but, then you have to keep pedalling harder knowing you have only two minutes to last out. At this point, the crowd started to thicken. I remember seeing old OUCC team mate Jim Henderson (former champion) roaring me on, but, the rest is a bit of a blur. I had to overtake my minute man on the inside. I didn’t loose any time, but when you’re head is blurry it’s hard to make a decision whether to go inside or outside. My legs were hurting like never before so I was at least giving it everything. There were so many people at the top I wasn’t entirely sure where the finish line was.

Anyway, I saw Robert Gough lying on the floor so knew that was it  I didn’t stop but just rode straight down via another ascent. When I got back to the car I was cold, and my head was still spinning. Now, that’s what I call a good day out!

I’d pretty much given it everything. A quick look at the results board showed not many people had done a sub four minute ride. I had just pipped Mike Cuming  (Team Raleigh) into 5th and was just behind Michael Smith (Team Corley). Dan Fleeman (Team Raleigh) and Matt Clinton (Mike Vaughan) were again deserved of top 2 spots. Women’s Champion was Lynn Hamel – Team NCA, just beating Chrissy Radon (team Zappi) into second place.

I had at least narrowed gap on Dan Fleeman from 32 seconds (2009) to 15 seconds. On the postrum, Dan said something about forgetting his skinsuit and having to borrow one 30 minutes before the start. And I thought that was the kind of thing I did…

It’s a funny result coming 4th. It’s my best ever position, yet 3rd would have been even better! Part of you can’t help but think maybe I could have got another second from somewhere. But, it’s the same from everyone, If I’d been 10 seconds slower I would have been in 12th position – so it’s very close up top.

I’m really looking forward to next year’s championship on Long Hill. I broke the course record this year, and it is the kind of climb that will really suit me (though it may also suit other road riders who may be tempted to have a go).

Anyway, it was a great event. I love doing the national  hill climb championship. There’s a great crowd and you can just give it everything knowing that it’s the last race of the season. Also nice to meet so many people who seem to read the random ramblings on this blog.

Thanks to all at Coventry CC and those cheering us riders on. 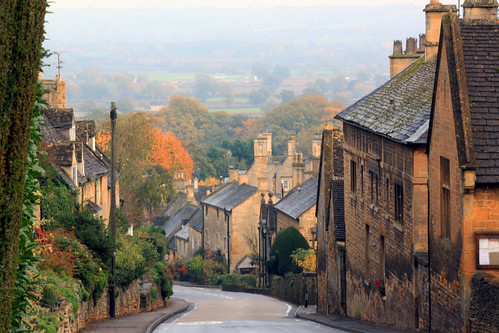 It was a nice drive back – Bourton on the Hill
Results